Much ado was made in the press recently about Ed Sheeran’s decision to wear an engagement ring. The shock! The horror! A bizarre quirk of an out-of-touch celebrity, surely? But the truth is that men are becoming much more adventurous when it comes to jewellery, and designers are responding with collections and collaborations that offer so much more than dog tags and surfer beads.

“Tainted by the 1970s moniker ‘medallion man’, gentlemen and jewellery have taken several years to become reacquainted,” muses British jewellery designer Stephen Webster, who has been courting the purses of both men and women for most of his career. His jewels, sold under the tagline “jewellery to separate the men from the boys”, include punky razor blade-inspired pendants and single diamond-dotted drop earrings. These come from the Thames collection, a collaboration between Webster and Blondey McCoy, the young fashion-designer-turned-skater.

While Webster’s personal brand of bling attracts a rock ‘n’ roll crowd that has always been more comfortable with a skull ring and layers of lariats (fans include singer James Bay), he feels that the scope is widening for masculine jewels. “The democratisation of men’s jewellery has now led to men from all walks of life being able to find a place for jewellery in their wardrobes,” he says. Harrods agreed with him, and held a Stephen Webster men’s jewellery pop-up last year…

This story was published in the April 2018 issues of Kensington & Chelsea, Mayfair, Marylebone & Fitzrovia, Notting Hill & Holland Park magazines (click through to see digital versions of each issue, and continue reading to see magazine layouts). Or read it online at Luxury London. Main image: Stephen Webster and Blondey McCoy. 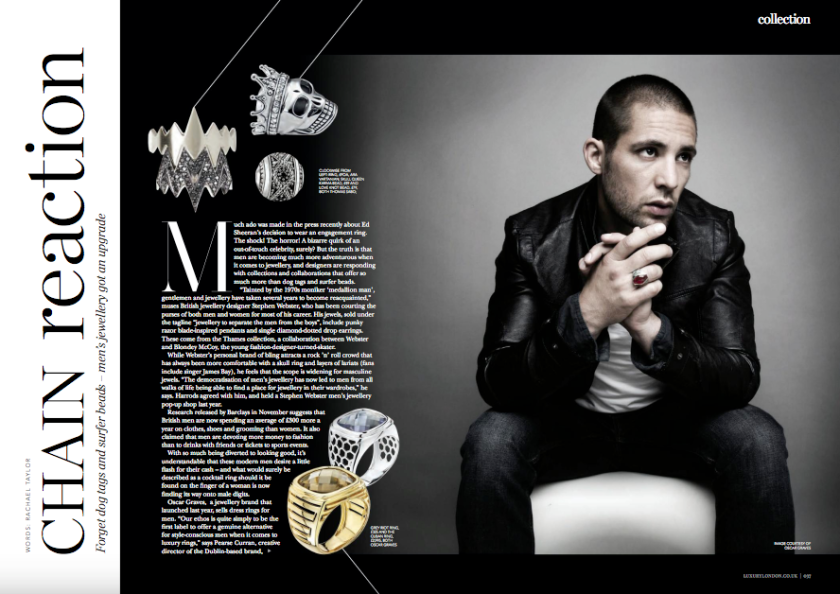